Women in the Media Issue of Tribal Woman Magazine 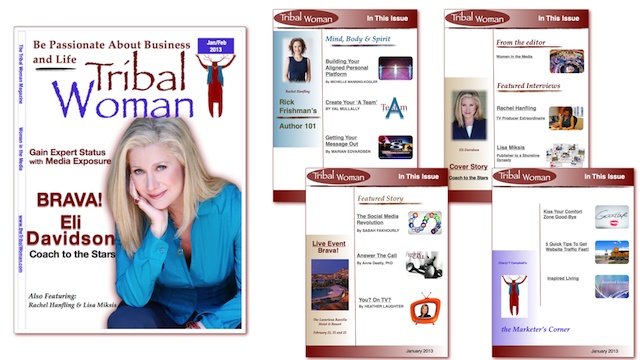 A Word From the Editor

Our Women in the Media Issue has been a long time in the making! Originally scheduled for November it was postponed more than once. We weathered the largest storm to hit the East Coast of the United States in over a century and my family was without power for eight day. We made it through, and then I had to weather storms of my own. My business was ‘hacked’; my web hosting company ‘lost‘ 12 of my websites; and, I experienced very severe (and strange!) tech issues that wiped out my interview footage!

The good news – there is always a silver lining to every situation and mine came in the form of the connections I made while developing this issue and in the many lessons learned during six weeks of unending obstacles. I am grateful for the gift of both.

You know I love to talk about relationships and how the beauty of connections make life interesting and fulfilling. In the past weeks I have been truly blessed!

I met Eli for the first time when I interviewed her in late October. We had an instant

connection and I have been working with her ever since! Recently, she helped me discover the “diamond” in my business that will make 2013 my best year ever.

Eli’s expert advice has been featured on The Today Show, CNN, Dr. Phil’s Decision House, ABC, NBC, CBS and FOX, as well as The New York Times, SELF Magazine, and Better Homes and Gardens. Eli is also a featured columnist with The Huffington Post reaching 21 million readers.

Rachel Hanfling was also wonderful to work with. Already a successful television producer she is a rising star in the ‘Expert Space’ sharing her insights gained as a producer on The Oprah Winfrey Show for ten years and launching Anderson Cooper‘s new show.

Most of the other ladies featured this month are colleagues including Lisa Miksis, who runs a large publishing company here in Connecticut.

As the weeks went by it became more clear that this issue would wait for 2013. That in itself is another gift because I recently ‘met’ Sabah and was able to share her knowledge with you as well. There is much to learn from all!