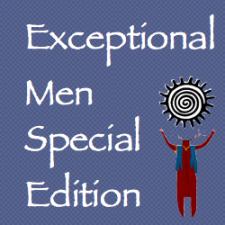 Madison, CT – Tribal Woman Magazine announces the publication of their first Exceptional Men special edition e-magazine, to be available for download on iTunes. Regular issues of Tribal Woman Magazine focus on the concerns of women entrepreneurs; but Exceptional Men will be a full-length edition featuring articles about (and by) successful and admirable men. The men featured as “exceptional” have earned this distinction with Tribal Woman not only by having successful marketing strategies for business, but by giving back to their communities, helping others, or investing some of their hard-won profits in humanitarian efforts.

More About the Exceptional Men Edition

The cover story of the first Exceptional Men edition will feature Nick Ortner, CEO of “The Tapping Solution,” and creator of the “Tapping Solution” documentary film, which explores EFT, a healing technique based on foundational concepts of both acupressure and psychology. Nick Ortner gained admiration and received accolades this past year when he used his own money and his ability to reach vast audiences to set up a huge outreach, helping the survivors of the Newtown school shootings deal with the emotions stirred by the tragedy. Mr. Ortner and his wife are longtime residents of Newtown, so he felt an overwhelming need to do what he could to support his community.

Other featured men in this special edition of Tribal Woman Magazine will include internet marketing millionaire Tom Antion – who is working to free the seminar industry from sociopathic, parasitic seminar speakers who rob audiences for enormous sums of money – and Dave Sanderson, one of the heroic passengers of Flight 1549, the flight that crash-landed in the Hudson in 2009.

The Exceptional Men issue of The Tribal Woman Magazine will contain articles in the same categories as regular issues, including Mind, Body & Spirit and Entrepreneurship. As always, it will also include the Marketing Strategies section, where you can learn valuable tips on marketing your business from savvy, experienced women entrepreneurs.